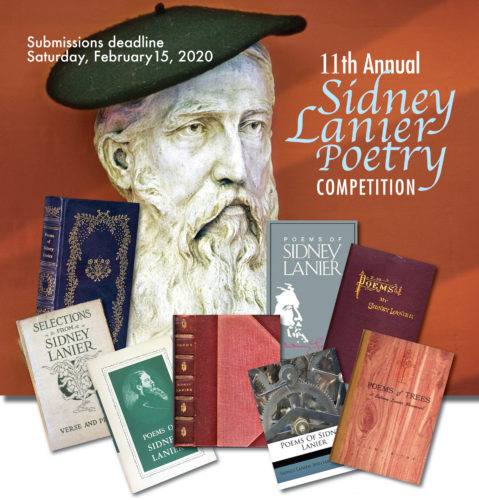 Unfortunately, due to requests for social distancing, we have to postpone all of the planned poetry events. We hope to reschedule some of them in the future.

Please see the winning poems below. We are grateful to our screening judges for choosing the finalists and especially to North Carolina Poet Laureate Jaki Shelton Green for selecting the winning poems. Congratulations to the winners!

Over a dock in Islamorada, winter shows up

the Hunter’s badge of stars.

his shield & cudgel raised, but not needed

against the mortal Scorpius, whose tail

I remember Orion’s other death,

the target when Apollo taunted

a smitten sister, Bet you can’t

pierce that dot in the distance which

was her lover’s head above water,

as he swam in peace, miles away.

to bring him back, but in honor,

her father strung the stars.

On the steps back, we pause to catch

who only boasted once that her girl

outclassed the holy spirits of the sea,

rousing their father to revenge.

Young, I thought that myth only

how wealth makes one feel untouchable.

The night sky should be the end of hubris

& the jealous possession that rules us,

but this is one of the last times

their inseparable youth & beauty are ours entirely,

before they quit their rooms & cleave to others.

Now I know silence is a safer vanity, & why

she had forgotten what the world is

ready to take away.  Yet,

a ruinous secret, I too love

my daughters more than I fear the gods.

The girl who’ll be my Mam is all alone,

out of the asylum on a weekend pass,

sitting on the steps of Maggie’s faded two-story,

listening as the Helldivers from Grosse Ile

each scored by an ensign aboard a grey tug

and our best will be needed at Truk and Iwo Jima.

Not supposed to drink (amobarbitol, too young),

she’s on her fourth beer from Waddy’s extra

icebox, and is eating blind robins on dark rye–

in a wheelchair on the porch of a bungalow

kitty-corner across St. John Street, who lost both legs

and much of his face to flaming bunker fuel

aboard the Oklahoma, will persuade himself

the Helldivers are Japanese Zeros

and begin to scream, sure that he’s back

at Pearl; four hours a day, seven days every week

he wails, unless the Helldivers-thumping live ammo

to the Plum Island mud before pulling up

and circling back, their 1700-horse Cyclone engines

roaring all the way down Eureka Road–

In the post-acute care room, rumpled
sheets no Sunday morning romp,
but hillocks of phone, hearing aid,
O2 tube socks.  I want to sit again
in your kitchen, stained glass sparrows
singing sun through the window, you
stirring up scrapple in a skillet, gold
bangles jingling, sizzling breakfast.
Those afternoons spent smacking
fragrant tennis balls, white skirt,
legs game-strong— now you grip
the orange ball, lift it up and down,
as Eric, the OT guy, sculpted beard,
upbeat voice, says, “You got this.”
The red light glows an aura around
your finger, measuring oxygen,
blood numbers rising and falling,
time’s special internal calculus.
Nurses come and go as you eat
from the tray, honey hair brushed
smooth, nails done coral, soft plush
blue bed jacket nearly touching
canned turkey gravy on the plate.
It’s all I can do not to reach over,
as if you were my child, and
redirect your arm gently, ever so.

This root, when boiled, has ever been considered as safe a vegetable for

he invalid as any in the vocabulary of esculents; and even the fevered

invalid, when prohibited all other vegetables, has been allowed to

of it, not having sufficient to injure the weakest body.

–Asenath Nicholson, Annals of the Famine in Ireland (1851),

So in her traveller days, when Mam did what the doctor

told her not to, and drank whiskey over her blood pills

and her flesh went hawberry red, and purple veins bulged

along her face and shoulders and arms, and the capillaries

burst in her eyes, turning her the image of the legendary

Red Hulk of Marvel’s Fate of the Hulks, a creature

whose tricks were howling with rage and an urge to catch fire,

whose tricks were howling with rage and an urge to catch fire,

she boiled turnips in brine, until the snailback was redolent

and drank turnip broth, then slowly worked the softened roots

and butter pats to a lukewarm paste, and ate what she could

keep down with a tea-and-honey chaser, until the medicine

was gone from her and the whiskey gone too, and her body

shriveled to a kind of human form, and for a time she was small

from nothingness into flames.

“Burning Out the Redwings” by Greg Rappleye

-Agelrius phoeniceous
The blueberries are a-flesh,
fat with juice, wanting only quick fingers,
but now the redwings wheel and strafe
wherever the migrants pick—
drawing blood, driving children out of the field.
So the men block the service road;
spray petrol along the ditch
and (here is the dangerous part) blow-torch
the cattails, until at flash-point–
as a great whoosh of oxygen
claps in from the high-bush
the already risen birds, panicked
fall for an old trick
and dive to the cacophonous fire.
Blown aflame, the redwings
corkscrew across the blown sky,
arcing like penny rockets, like hissy little meteorites,
scattered as far as the windbreak.
And at dawn, when the migrants come back
to pick their way to the ashy ditch,
those who dreamed the scree of flaming birds
will fill their buckets with berries
again and again.  But having lost a sweet taste;
a simple necessary sweetness,
will no longer eat of the ripened fruit
as they work across the field.

“Past the Concrete Wall” by Neil Rostick

Further and further I go

Past the limbs of trees strewn with ivy

But still I walk on, past the concrete wall

Descending further into silence,  past the pile of small branches

The morning dew crystals shimmering against the gray

But still I walk on, past the concrete wall

A creek runs through the shadows

As it carves a way for itself through the soft Earth

As it has always done – and will always do

Even as I walk on, past the concrete wall

The littlest brown spider crawls on me

Until it falls down into the mud at my feet

And like a spring it bounces upright and crawls away

Its destination will always be a mystery

For only mother nature can know

As I walk on, past the concrete wall

I step once more on the worn trail

Through the emerald green blades of the onion grass

An ombre of deep green and sunlit brown

But this was not made by Vincent Van Gogh

The delicate brush stroked made by time and patience

Their work is never done, so they continue on

As I walk, past the concrete wall

And even as I am away from the brick and mortar

I still hear and see human nature, what we have done

You say this land is yours, that it’s private property

But nature belongs to all

We use these woods as a landfill for our own needs

But what about the crystal clear stream, the onion grass, the spongy moss

And even the brown spider

Yes, the little brown spider that bounced like a spring

But maybe they’re right- All of them

The chill of a winter breeze

Step by step I walk away, past the concrete wall

I hum as the sun warms my face with its golden rays
And a rustle comes from the breeze playing with the leaves
The birds sing their separate songs, each filled with praise
As the trees creak with every push of the wind
And the dry grass crunches with every step of my feet.
Croaking loudly in unison, the toads make themselves known
They startle all with a plop when into the water they drop.
I hear small footsteps of squirrels running through the fallen leaves
As acorns thud the ground and bounce around
The brook babbling as it finds its way down the mountain
And water droplets trickling as they seep though the rocks.
In the distance, there’s a faint screech from a lone hawk
From the high branches the squirrel’s cackle
And from the sky, the crow’s caw
As if they laugh and are saying “haha”
Come play along
This is nature’s song

What is a star?  I’ve never seen

Amid a heavenly gleam,

As the legends told of inky black nights:

Is that a star?  What you hold

When your spirit is resolved

And your soul glimmers of gold?

When you wish upon it, does the wish come true?

Does it grant you your dreams of a ife all anew?

Is that a star?  On the ground,

That sleep, beautiful and sound?

Do they kill you quickly, leaving just remains?

Are they a star?  Lying down

In their coffins underground?

Do they still glow now, with thier lights burnt out?

Are they up in the sky, or still underground?

Are you a star?  Do you shine?

Do you watch over monsters,

Above the fabric of time?

Are you infused with determination?

Will you, one day, bring us our salvation?

Did you come from above to save us all?

Did you shoot like a star when you took your fall?